Expand all Close all

Tamás Harczos did his studies in information technology with minor Digital Signal Processing at the University of Veszprém in Hungary from 1998 to 2004 and finished with a diploma (master’s degree) in computer science.

During his diploma thesis, he was with the digital signal processing lab of the university. He wrote his thesis about a novel low bit-rate speech compression algorithm and its real-time implementation on Texas Instruments C6711 DSP.

After his graduation he worked as embedded programmer for the automotive industry before joining the Pázmány Péter Catholic University (PPCU) in Budapest for further studies at the end of 2004. In the Multidisciplinary Doctoral School of the Faculty of Information Technology of the PPCU he studied neurobiology, neurophysiology and cellular-neural-networks, and participated in teaching undergraduate students.

In 2006 he moved to Ilmenau, Germany, and joined the Medical Acoustics group (now Bio-inspired Technologies) of the Fraunhofer Institute for Digital Media Technology IDMT. Since 2007 he is also a PhD candidate at the Ilmenau University of Technology.

His current research interests focus on the use of auditory models in cochlear implants (CI), and the algorithmic aspects of CI speech processors and that of sound source localization with bilateral CI systems.

Conventional speech processors for cochlear implants use mathematically based information-coding strategies. The Bio-inspired Computing group of the Fraunhofer Institute for Digital Media Technology IDMT has developed a new CI stimulation strategy called Stimulation based on Auditory Modeling (SAM). This approach leads to a digital representation of sounds that resembles natural firing patterns of auditory nerve fibers quite well. 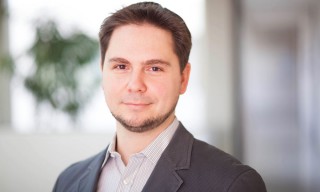